"Like leaves, mushrooms change after they’ve fallen–browning, curling, glistening with seagreen mold. This one looks like ruffles of black satin furled against the earth. White corals turn black. Golden leaves buttress the decay. Everything on the forest floor goes wet and soggy, sinks into itself and then into the soil." 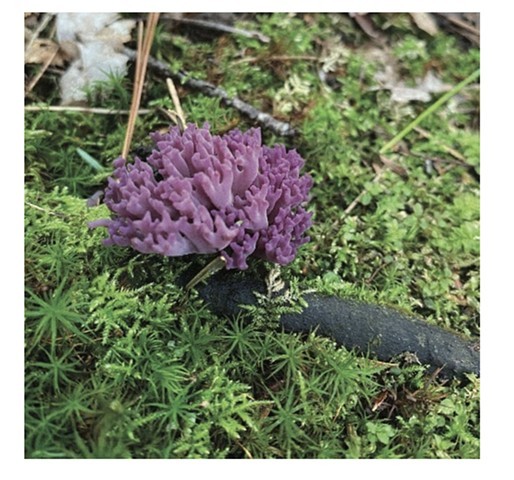 Most recent book: An American Quilt: Unfolding a Story of Family & Slavery Pegasus Books, May 1, 2018

"In this far-reaching history, the discovery of an unfinished antebellum quilt becomes an investigation of the fragile scraps of documents used to make its backing. A meticulous and insightful account of slavery’s role in early mercantile America.” - The New Yorker

"In fascinating and exhaustive detail, May chronicles the generations of three intermarried families and the enslaved people they owned....Deeply researched and vividly written, May’s creative achievement casts new light on the often ignored contributions enslaved people made to American society."

“While acclaimed writer Rachel May was studying a textile collection, she stumbled on an unfinished quilt that took her on a journey from the Caribbean to New England and into the dark depths of slavery ... An American Quilt drives home how little we actually know about slavery—and how much history we can still uncover.”

"An American Quilt: Unfolding a Story of Family and Slavery, which includes a number of images and a full-color insert, examines the complicity of the North, wrestles with present-day racism, and is a sensitive, thoughtful, and probing look at what’s left to be found when more of the covers are pulled off the history of American slavery."

"Do yourself a favor and suggest this book for your book group or quilting bee because it’s the perfect read to discuss with quilters and bibliophiles alike.The breadth and details in this book are as fascinating as the true story that forms the skeleton of the book. May delves into the history and background of not only an unfinished quilt made from fabrics from the 1830s but also the household of the couple who made it. It’s a tangled web indeed that spans from New England to the Caribbean as well as the historical backdrop of both white and slave family life during the era, the slave trade, trade routes between the agrarian south and the industrialized north and everyday details of 19th century life."

“With precise stitch and complex patterning, Rachel May pieces together an intricate story of a family, the people that family enslaved, a writer, and a country. With as much lyrical beauty as the quilts themselves, May ties together the myriad ways the treatment of enslaved people is sewn into the fabric of our country. This book gives long-overdue credit to quilt-making and May deserves much credit for stitching this beautiful book together.”

"In An American Quilt, Rachel May is able to draw out the entire story of southern slavery and northern complicity from a remarkable discovery--a quilt top created in Charleston, South Carolina, in the 1830s, and a notebook containing a cache of letters associated with it. From these materials, May weaves an extraordinary account of the families of the quilt makers--a Rhode Island woman descended from slave traders and the slave-holding husband who had brought her South to live. She also is able to invoke the lives of the enslaved population whose labor produced the cotton of which the quilt top was made--which fueled the rise of the New England textile industry. This is a terrific story, well researched and beautifully written, that both reveals the history associated with the quilt top and traces the author's efforts to unearth it."

"An American Quilt cleverly weaves together the disparate fields of material cultural, northern industrialization, mercantilism, trade and slavery. Through deeply a researched history of quilter Susan Crouch, May reveals the multifaceted economic and personal relations between northern textile manufacturers and southern enslavers. Moreover, May reminds us that the handmade quilts of white antebellum slave-holding and non-slave-holding women carry unlikely histories, including those of enslaved African Americans whose labor and stories are usually unacknowledged or overlooked in traditional accounts of American quilting."

- Christy Clark-Pujra, Associate Professor of History in the Department of Afro-American Studies at the University of Wisconsin-Madison; author of Dark Work: The Business of Slavery in Rhode Island (NYU)

“May follows the footsteps of Linda Lipsett and Cuesta Benberry, who revealed a more thorough picture of the contribution the African American quilt maker. These stories need to be shared over and over again and Rachel May does so brilliantly, intelligently, and with care. The history of enslaved people and today’s on-going racism is not glossed over in this deeply researched and beautifully written text. An American Quilt is a major contribution to the multilayered and complex history of quilt making in America.”

- Roderick Kiracofe, author Unconventional & Unexpected (among other books on the art and history of quilts) & art collector

Following the trail left by an unfinished quilt, this illuminating saga examines slavery from the cotton fields of the South to the textile mills of New England—and the humanity behind it.

When we think of slavery, most of us think of the American South. We think of back-breaking fieldwork on plantations. We don’t think of slavery in the North, nor do we think of the grueling labor of urban and domestic slaves. Rachel May’s rich new book explores the far reach of slavery, from New England to the Caribbean, the role it played in the growth of mercantile America, and the bonds between the agrarian south and the industrial north in the antebellum era—all through the discovery of a remarkable quilt. While studying objects in a textile collection, May opened a veritable treasure-trove: a carefully folded, unfinished quilt made of 1830s-era fabrics, its backing containing fragile, aged papers with the dates 1798, 1808, and 1813, the words “shuger,” “rum,” “casks,” and “West Indies,” repeated over and over, along with “friendship,” “kindness,” “government,” and “incident.” The quilt top sent her on a journey to piece together the story of Minerva, Eliza, Jane, and Juba—the enslaved women behind the quilt—and their owner, Susan Crouch. May brilliantly stitches together the often-silenced legacy of slavery by revealing the lives of these urban enslaved women and their world. Beautifully written and richly imagined, An American Quilt is a luminous historical examination and an appreciation of a craft that provides such a tactile connection to the past.